In critical real-world applications of machine learning, it is important to understand when a model’s predictions must not be trusted. On data drawn from the same distribution as the training set, machine learning models can often achieve super-human predictive performance. However, predictions on out-of-distribution (OOD) inputs should be ignored and OOD samples, such as data from novel, unseen classes, should be flagged.

Consider, for instance, a hospital with a severe shortage of qualified personnel. To make up for the lack of doctors, the hospital would like to use an automated system for real-time diagnosis from X-ray images (Task I) and a novelty detection system, which can run at the end of each week, to detect outbreaks of novel disease variants (Task II), like in the figure. In particular, the detection algorithm can be fine-tuned weekly with the unlabeled batch of data collected during the respective week. 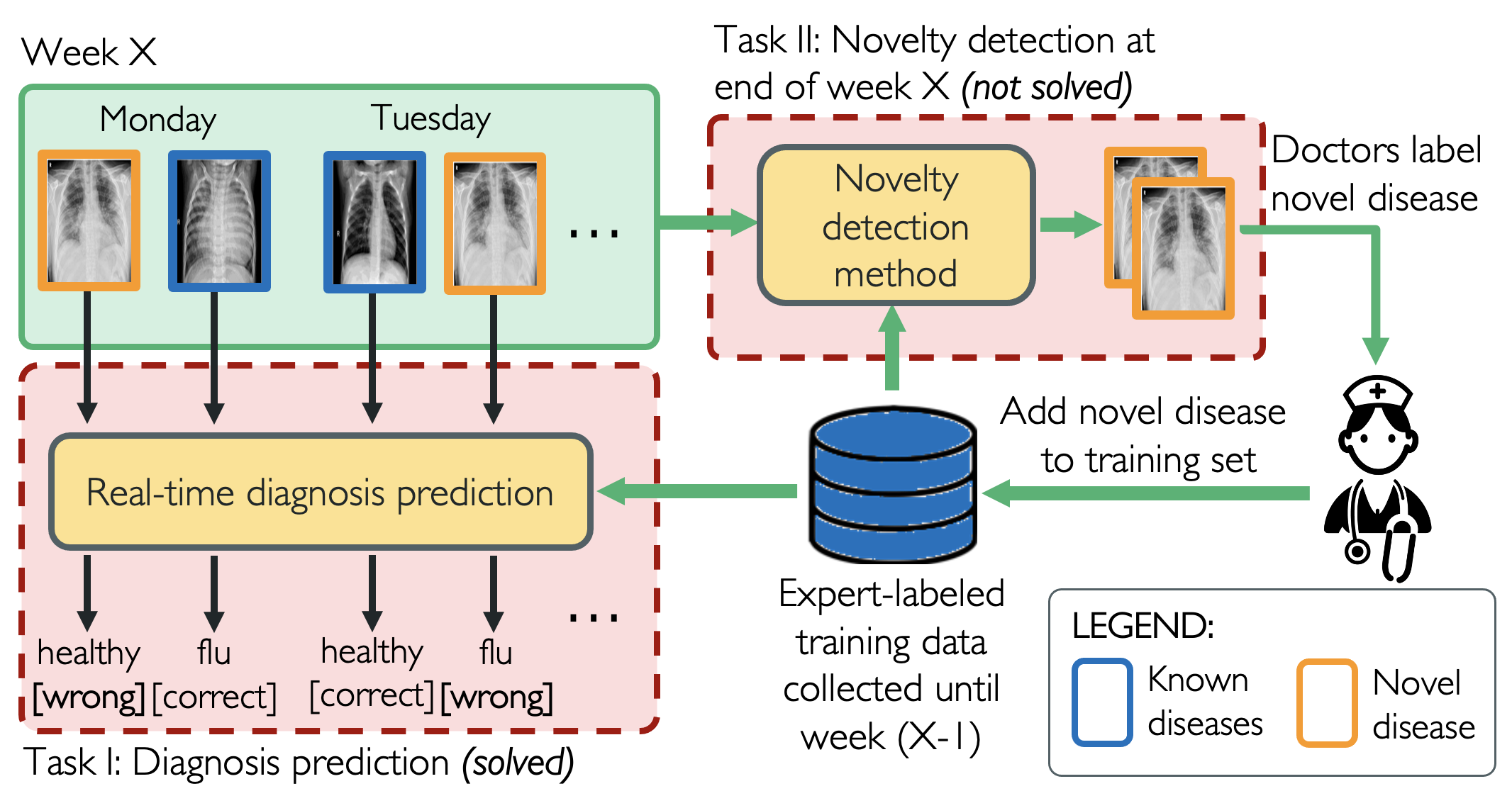 Scenarios like Figure 1 are called the semi-supervised novelty detection (SSND) setting. Concretely, SSND approaches can be trained on both a labeled ID training set (e.g. the dataset used for training the classifier for Task I) and an unlabeled set containing an unknown mixture of in-distribution (ID) and OOD samples.

Of course, in an SSND scenario one can still use an unsupervised novelty detection approach. However, this can be problematic for a number of reasons:

SSND methods have the advantage that they can always adapt to new emerging OOD data, without explicitly knowing which are the OOD samples in the unlabeled set. Thus, in principle, they can solve the issues faced by UND methods. However, prior SSND algorithms either don’t work with complex models like neural networks (e.g. Blanchard et al, Munoz-Mari et al) or have poor performance on near-OOD data (e.g. Yu et al, Kiryo et al).

We set out to develop semi-supervised novelty detection methodology that can be applied on large scale problems which use deep neural networks. The approach that we propose can be described simply as follows:

Train an ensemble of classifiers such that the models' predictions disagree only on OOD data.

1) Training procedure: We train each model \(\hat{f}_c\) in the ensemble on a training set that consists of the labeled ID dataset \(S\) and the set \((U, c)\). The latter contains the samples in the unlabeled set \(U\), all labeled with the same class \(c\) selected at random from the set of ID labels. Since we train each model \(\hat{f}_c\) with a different label \(c\) assigned to \(U\), we avoid ensembles with too little disagreement, like in Figure 2a.

Figure 2. We want ensembles with the right amount of disagreement, limited to only OOD samples.

These results show that it is indeed possible to use complex neural networks to detect samples from novel classes with great accuracy. Nevertheless, there is still room for improvement and for finding even more effective ways to obtain ensembles with regularized disagreement.

How do we detect a novel-class sample?

Why early stopping? How about other regularization methods?

In principle, other regularization techniques could work too. However, early stopping has the advantage that we only need to train one model to select the optimal iteration using an ID validation set. Other regularization techniques require expensive grid searches for hyperparameter selection.
Bonus: In the paper we provide theoretical guarantees for early stopping, for a Gaussian mixture model and a two-layer neural network. Our result shows that there exists an optimal stopping time at which model \(\hat{f}_c\) predicts the label \(c\) on \(U_{OOD}\) and the correct label on \(U_{ID}\).

How large does the unlabeled set need to be for good performance?

Our method works well for a wide range of unlabeled set sizes, as we discuss in the paper. In practice, if the unlabeled set is too small, one can simply revert to using unsupervised novelty detection techniques.

Can the method be used for transductive novelty detection
i.e. evaluate on the same unlabeled set used for fine-tuning?

Yes! Check out the paper for the experiment results.

What is the computation cost of training ERD?

We only need to fine-tune two-model ensembles to get good performance with ERD, as we show in the paper. For instance, in applications like the one in Figure 1, ERD fine-tuning introduces little overhead and works well even with scarce resources (e.g. it takes around 5 minutes on 2 GPUs for the settings in Figure 3).

How does ERD compare to pretrained models like ViT?

OOD detection with pretrained ViT models performs great when the OOD data is similar to the data used for pretraining (e.g. CIFAR10 classes as ID and OOD and ImageNet used for pretraining). However, our experiments revealed that OOD detection performance deteriorates drastically when ID and OOD data are strikingly different from ImageNet, e.g. SVHN, medical data or even FashionMNIST.